Schrade has had a rocky history with a lot of us, from its traditional American beginnings to the rebadged “New Schrade” owned by Taylor Brands LLC (of reformed mall ninja fame). I have always had a slightly kneejerk negative reaction to the whole thing, but after many years of seeing these inexpensive slabs of steel pop up everywhere around me, I had to crack and take a look.

Regardless of what you think of Taylor Cutlery, you should understand that the Schrade SCH304 is a serious knife that brings a serious amount of power to the table. It ain’t no gimmick, and whilst it’s definitely on the loud side with its overbuilt… everything, the reality is that the SCH304 is a shocking amount of well machined steel for the price Schrade’s asking for. This assessment isn’t based on the fact that they created a 10 ounce folding monster (more on this later), but because the knife is made of quite a ridiculous amount of steel that happens to be very well put together for less that $25.

As a side note, you may think that this is my first “New Schrade” knife judging by the lack of evidence of others on this blog, but you would be wrong. If you look at my Cold Steel Bushman review from April last year, you can see the Schrade SCHF9 make a guest appearance. The reason there is no review of that knife yet is because reviewing stuff for me is a process. I like to own knives for a good while before I pass judgement, but anyway, we are not here to talk about that monster fixed blade but rather this beastly folding… tank? The Schrade SCH304 is one of the most unique blades to be released in the past few years and I am kicking myself for ignoring it for so long. 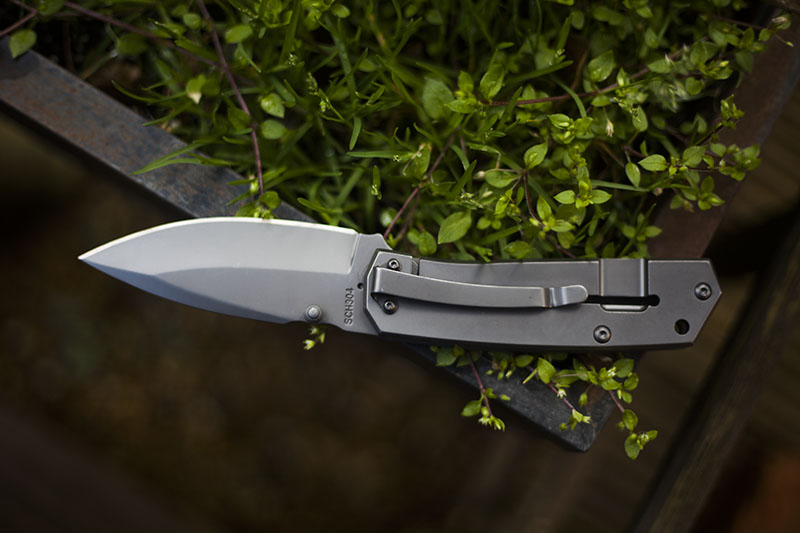 Right off the bat, let’s address the elephant in the room – it’s made of steel. All of it is made of steel, this means the knife is heavy, like…a truck in your pocket levels of heavy.

We talking 9.7 ounces here, people. This is the most important fact about the Schrade SCH304. Its weight is so extreme that it’s frankly shocking the moment you pick it up. Comparable knives (in terms of bulk) are either made of titanium (which reduces the weight, but would be impossible in a knife at this price point) or they simply don’t bother with steel framelocks and instead go with G-10 + a light locking system like the Axis lock in the Benchmade Adamas.

In any case, so much of this knife revolves around its heft and it’s silly to discuss anything before addressing this point: no matter how you feel about the SCH304’s toughness or performance, you may not be the sort of person who can handle EDC’ing a 9.7 ounce slab of steel. That’s just the reality and something you need to think about.

At no point can we compare the SCH304 to pretty much any other knife I own because frankly, it’s a behemoth in terms of weight and heft. If you want a clear example, the magnificent Cold Steel SRK, which is a full size “survival knife” weighs in at 8.2 ounces… that’s more than a whole ounce less than this folding pocket knife with a 3.7 inch blade. 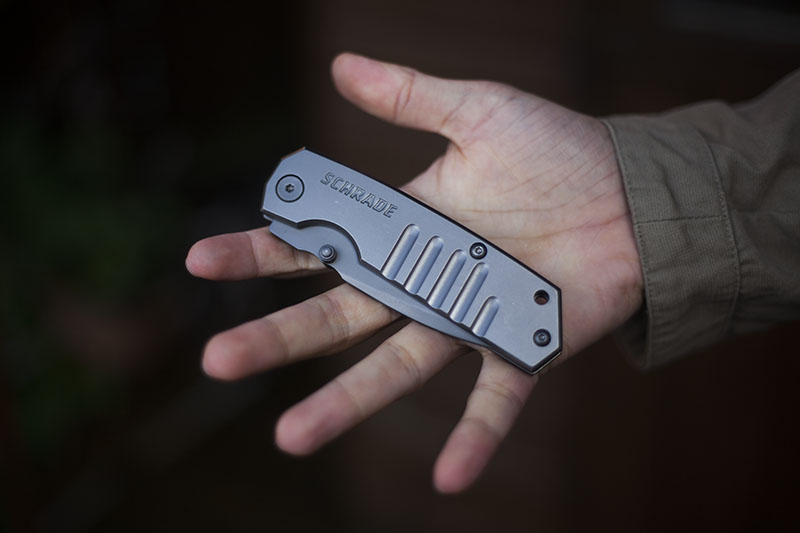 The design of the Schrade SCH304 is utterly unapologetic. This is never going to be a church knife. It’s the sort of knife that punches you in the face and then asks you to say sorry – there is no subtlety. Everything screams hefty and mean, which is not at all a bad thing, actually as far as aesthetics go, I rather like it. At least it’s different from pretty much all knives in my collection, which is refreshing. The entire knife is a drab matte “titanium” coated grey. The photographs make it look quite reflective, but in hand it’s pretty sober and fits the general style of the knife.

As you can see below, the blade is effectively a glorified spear point, even though its advertised as a drop point. The spine of the blade has a deep (unsharpened) swedge and in practice, it looks damn cool. Due to the “heavy-duty” bias of the design, cutting performance will reflect this. The grind of the blade is obviously a hollow grind that begins at around 50% down the blade which in effect creates a wedge sensation when cutting certain things, like an apple for instance. Obviously no one expected anything different, but its bias is towards slicing shallow materials or doing very rough work where a folding scalpel would be less than optimal. 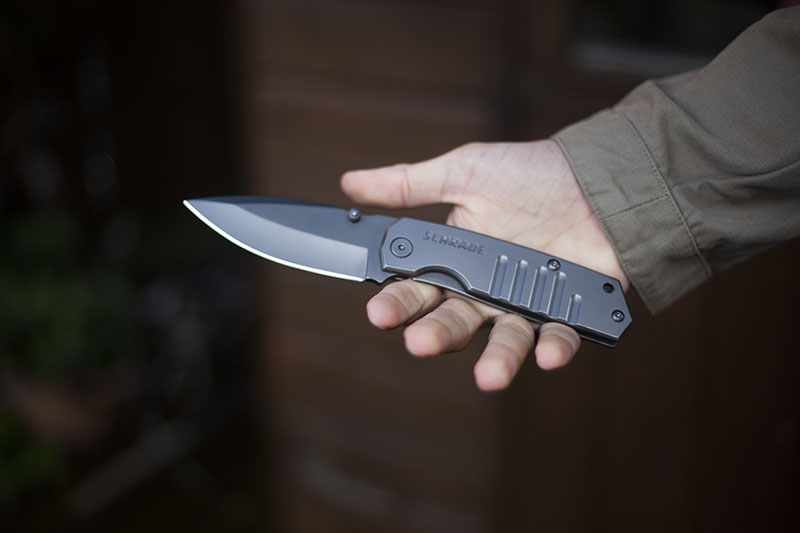 The 8cr13MoV blade stock is super thick: 4 mm thick in fact. That’s impressive taking into account how nicely the blade tapers into an aggressive tip. Penetration is not an issue and the machining is pretty perfect with zero grind deviation, something which is nice to see on a knife this inexpensive. Interestingly, the thumb studs are ambidextrous, but the pocket clip does not flip to the other side to accommodate wrong-handed users.

In terms of edge retention, the blade seems heat treated well enough and it arrived (surprisingly) screaming sharp. Very impressive, but then again don’t expect Opinel levels of performance; thick and overbuilt is the name of the game here. 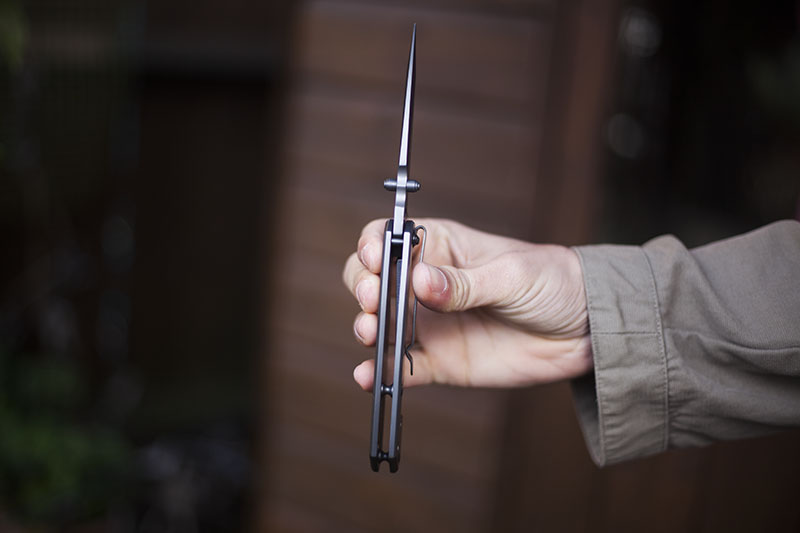 As I already mentioned, the Schrade SCH304 features a very stout framelock with super nice engagement, as in, bank vault levels of feel. The mating is spot on and I noticed zero lock rock, blade play, or anything that would make me think it wasn’t 100% trustworthy or reliable. This is a solid design, and trust me, I have owned it for quite a long time now and have been flipping it non-stop: the lock hasn’t traveled. At all. It has settled in at 50% and stayed there.

Sadly, one of the few drawbacks/cost saving “features” is that Schrade used a nylon washer on the framelock side. Personally I despise nylon washers. I have had horrible experiences in the past with them (they got pinched and ended up binding between the pivot and frame), but that’s just my anecdotal experience. I will 100% change this to a nice bronze phosphor option and this minor annoyance will be fixed. This could just be me though, have you had any issues with nylon washers? Let me know in the comments. 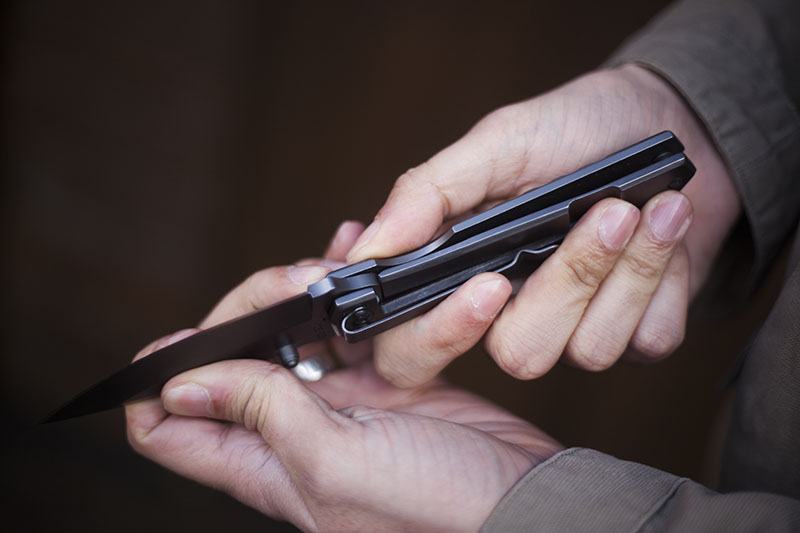 Sadly, the pocket clip is cheap stamped steel and doesn’t match the knife (visually) which frankly isn’t particularly surprising. Position is right side, tip down only.

A lot of times with lower price tier knives, it feels like manufacturers will throw in a generic clip as an afterthought, and that seems to be what happened here. In this case, the clip just doesn’t match the knife’s brutish appearance, especially with the deep machined grooves in the scales. With that disclaimer out of the way, in terms of performance, the clip works just fine. Deep carry and solid, but frankly, the SCH304 is a folding boat anchor, if you are going to EDC it then you can simply attach a lanyard, throw it in your pocket, and it will stay there. 10 ounces of steel ain’t gonna disappear. 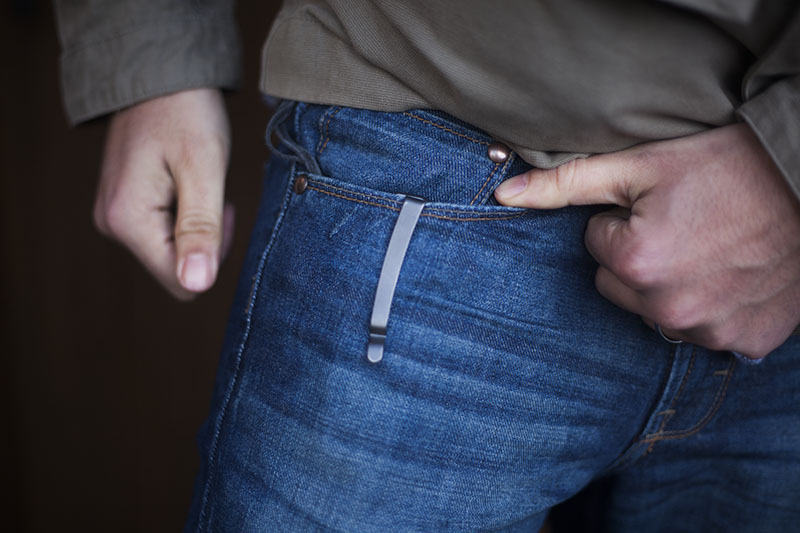 The ergonomics are solid. No real hotspots and the scales are nicely contoured. With that said, the SCH304 is handle heavy, but that’s a given. We are talking full steel construction here. Interestingly, the knife has zero jimping, but two mini swedges/divots on the spine. They don’t add any grip, but act as a very comfortable thumb rest when the SCH304 is gripped in a traditional saber grip.

Zero choil, so if the lock fails (highly unlikely in my experience with this knife) you can kiss your digits goodbye. All in all, the scales are decently ergonomic with a very neutral platform. No finger grooves or deep cuts. 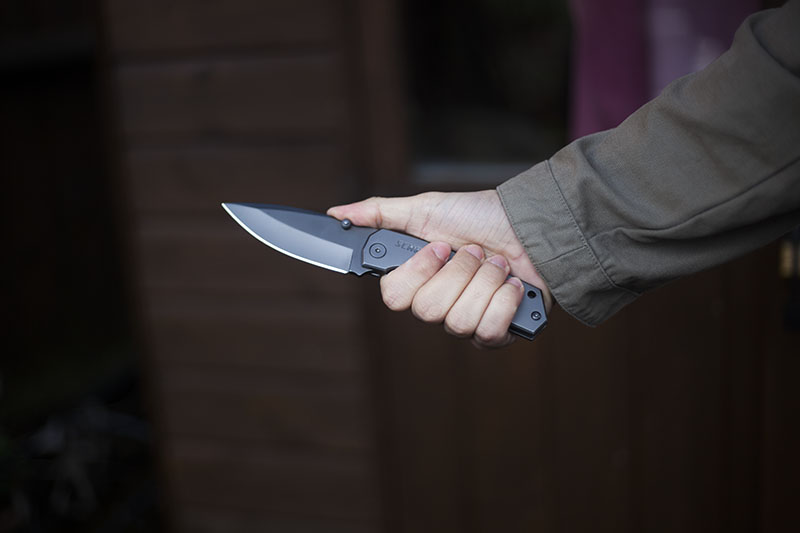 The lack of “ergonomic features” like finger grooves means you can grip this knife in pretty much any grip. It’s very forgiving, even in a pinch grip. The clip doesn’t interfere with the comfort either, so good job, Schrade. 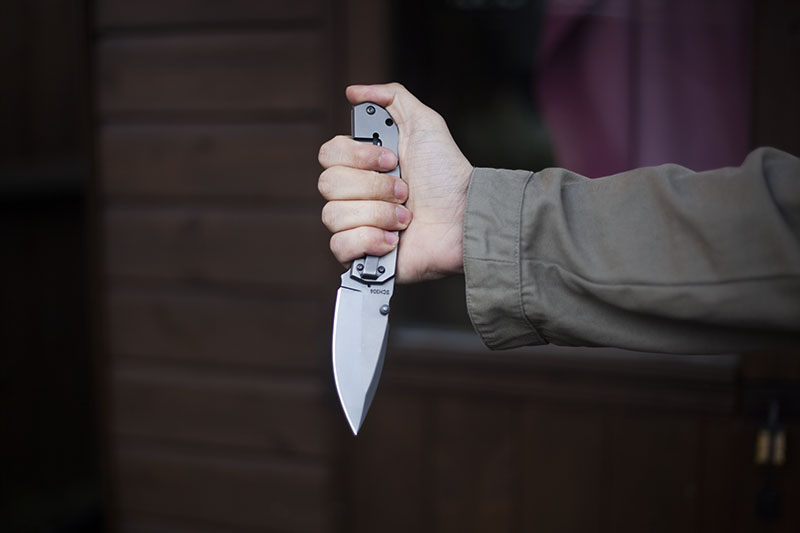 If you know me (and by now, you should) you already know I love it. I own hundreds of knives, literally hundreds, and I am always a big fan of handling “something new” – as long as it works. The only downside of this knife are consequences of its absurdly cheap entry point. When you have a sub $25 beater, you can’t be too picky with materials, which means the Schrade SCH304 is bulky, heavy, and tough. As long as you accept that – the SCH304 delivers on all fronts.

With that said, how cool would it be if they released a premium version with titanium scales? Or how about an extra 10 bucks, but skeletonize the crap out of the framelock and replace the other scale with aluminium or G-10? 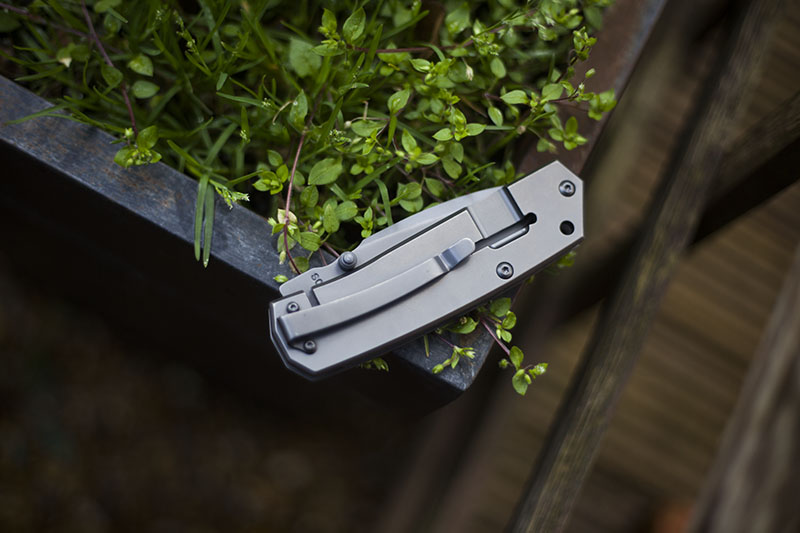 Right, so in conclusion: is the Schrade SCH304 a good buy? Unreservedly yes: so long as you fully understand that it doubles as a boat anchor.

The weight is so extreme that the knife will change how you handle your EDC. In my case, this is what I would define a stationary knife. It stays either in the car (perfect glove box knife in my opinion) or on my desk ready to handle rough tasks like gardening or whatever. If you need a folder that you can use and abuse with no consequence, this is probably your best bet. In fact, in terms of sheer tenacity, this is the sort of folder you could dig a trench with. Whether you can handle its heft however – that’s another question.

Oh and one last thing, Schrade, please give your knife models real names. Okay? No more of this SCH## nonsense. Unique, interesting knives deserve unique interesting names. I vote we call this bad boy “The Sherman.”